How to Use Green’s Dictionary of Slang

The following explanations are exemplified in the model of dictionary layout on page xxix [reproduced at the bottom of this web page].

Entries identical in spelling are ordered according to their part of speech, in the sequence noun, adjective, verb, adverb, phrase, exclamation, suffix, prefix, infix, preposition, pronoun, abbreviation. Where a noun, verb etc. has etymologically distinct meanings, these are divided up into separate entries. Within each part of speech, each word is given a superscript number to indicate that they are homographs, i.e. words with the same spelling but different etymology (e.g. dog n.1, dog n.2 etc. followed by dog v.1, dog v.2 etc.). The homographs are arranged in a chronological sequence, according to the first usage of each entry.

All entries are listed alphabetically, on a letter-by letter basis. A capitalized form will come before one without an initial capital (eg Cam precedes cam); a multiple-word form comes before a hyphenated or otherwise punctuated form; and an entry with parentheses is alphabetized on the full term, ignoring the brackets. Abbreviations are ordered as they would be if spelt out, e.g. & = and, Mr = mister. Terms beginning with Mc are alphabetized as Mac.

Each entry may have the following elements:

The elements of an entry are explained in greater detail below:

The word (in bold type) projecting at the head of an entry is referred to as the headword. Some headwords included in the alphabetical order simply contain cross references to a full entry found elsewhere in the dictionary.

Following a headword is a label in italic to indicate the part of speech. This label is usually abbreviated, e.g. adj. for adjective, n. for noun (but note full-out infix).

Words spelt or formed in more than one way, but sharing the same meaning(s), dating and usage, are shown in brackets after the word also.

A word in small capital letters in an etymology indicates a cross-reference (see below). A question mark indicates a possible link between the headword and the etymology, rather than an established one.

Note also that when part of a word within a definition is given in italics, eg anarchist at anarcho, it demonstrates the derivation of the slang headword from an abbreviation of the Standard English word.

A label relating to the usage of a headword or sense appears in italics within brackets , usually following the date label. These indicate either the geographical usage of a term, e.g. W.I., or the social/cultural usage, e.g. teen.

A definition is given detailing the meaning of the headword. Where an entry or a distinct homograph has different shades of meaning, each definition follows a sense number in bold. Sometimes, letters (e.g. (a)) are used to denote sub-definitions grouped under a main sense. Main senses are ordered according to chronological first appearance, although some semantic ordering does occur. Note that a sense that is still in use may be listed before one that is not, if it originated earlier. The numbered senses may have their own usage labels, alternative forms, and etymologies; alternatively, if one or all of these applies to all the senses of the entry, it comes before the first numbered sense.

Each definition is followed by one or more citations or examples of the headword in use, which illustrate the sense and document the usage over time. Citations are listed in chronological order from the earliest usage found to the most recent, with a maximum of one per decade for the headword, plus additional citations where required for alternative forms.

Citations always contain a date in bold type, usually the date of publication. Thereafter, they may contain an author in small capital letters, a title in italics, and edition date in brackets if the first edition was not consulted. There is always either a page reference or similar (e.g. line, chapter, act, scene etc.) or something in square brackets to denote a non-printed format (e.g. [lyrics] or [Internet]). After that follows the text of the citation containing the headword (or alternative form) and this text is given as it appears in the source cited.

Some citations do not include text, usually citations from dictionaries. These are given to demonstrate the headword’s inclusion in the cited dictionary and thus usage at the given date, without need for the actual text which would be little more than a repeat of our own definition.

Some citations are enclosed within square brackets. Usually (but not always) the earliest citation given, these represent an example of a precursor or a parallel or similar usage, rather than an example of the precise usage of the headword in the sense specified.

Where a citation has been taken as it stands from another work, usually a dictionary, this will be credited with an abbreviation in square brackets at the end of the citation. For example, [F&H] for a citation that has been taken from Farmer and Henley’s dictionary, Slang and Its Analogues.

Subentries are slang terms not listed as separate entries, but instead given in smaller bold projecting within the main headword, following the various main senses and their citations. Subentries are terms related to or derived from the headword, as explained below, and they are grouped underneath the main headword in order to preserve and explain their etymological ‘family’ link. Sometimes subentries are not based directly on the main slang senses given at the headword, but rather on a literal or figurative use of the Standard English root word. These subentries will be listed at the headword under a separate heading ‘SE in slang uses’, e.g. fruitful vine or fruit for the sideboard under fruit n. In some cases, where a related word has derivatives etc. of its own, multiple parts of speech (e.g. n. and v.) or is simply very important in its own right, it is presented as a separate entry rather than a subentry. For example, cop a plea v. and arse bandit n., where the etymologies are used to demonstrate the relationship to cop v. and arse n. Subentries are listed alphabetically within one of the following four categories, and are usually given with definitions, usage labels, alternative form(s), etymologies and citations of their own (see also below).

These are words which are formed by adding a suffix or ending to the headword or alternative form.

Compound terms are those made up of two or more words, the first being the headword or alternative form. They may be hyphenated, one-word or multi-word compounds. Those multi-word terms which do not begin with the headword are listed under the third category, phrases.

Phrasal items relating to the headword may be phrases, phrasal verbs or idioms, or multi-word terms which do not begin with the headword (e.g. old fruit n. at fruit n.).

Exclamations containing the headword are listed alphabetically following the other categories.

Most subentries are assigned parts of speech, to make the usage clear. However, exclamations and phrases other than those used adjectivally, adverbially or as nouns or verbs will not include a part of speech. Similarly, any subentries grouped by part of speech will not repeat the part of speech label given in the heading.

In most cases, each subentry will have an individual definition, but in exceptional circumstances, where a large number of subentries have the same meaning, these are given an overall definition and not individually defined, although citations are given for each bold subentry.

Subentries may be grouped under further headings, in addition to the grammatical categories of derivatives, compounds, phrases and exclamations. The most common of these headings is ‘SE in slang uses’, as explained above. In addition, longer entries may be divided semantically, or occasionally grammatically, e.g. ‘pertaining to sycophancy’, or ‘comparatives’.

A word or expression which appears as a full headword elsewhere in the dictionary will be marked as a cross-reference, in small capital letters. Cross-references occur mainly in the etymologies, in cases where the origin of an expression lies in another slang term. For example, in the etymology for nabbing cheat, [nab v.1 (3) + cheat n. (1)], the words in small capital letters direct the user to other entries, with the bracketed numbers referring to the specific sense numbers.

Cross-references to nested subentries also occur. These are displayed in italic small capital letters, e.g. put the acid on under acid n.2.

Cross-references may also appear in round brackets following ‘c.f.’, which refers the reader to other entries for comparison.

In addition, cross-references are also used to direct the user from one spelling or form of a particular term to the main spelling or form under which a term is shown. Where the user is referred directly to a main headword, the cross-reference is worded as: altemal n. see altamal n. Some related terms may be listed under both spellings, and in these cases the user is given pointers as to where to look rather than direct cross-references, e.g. arsehole see also under asshole and combs. or ampster see under amster. 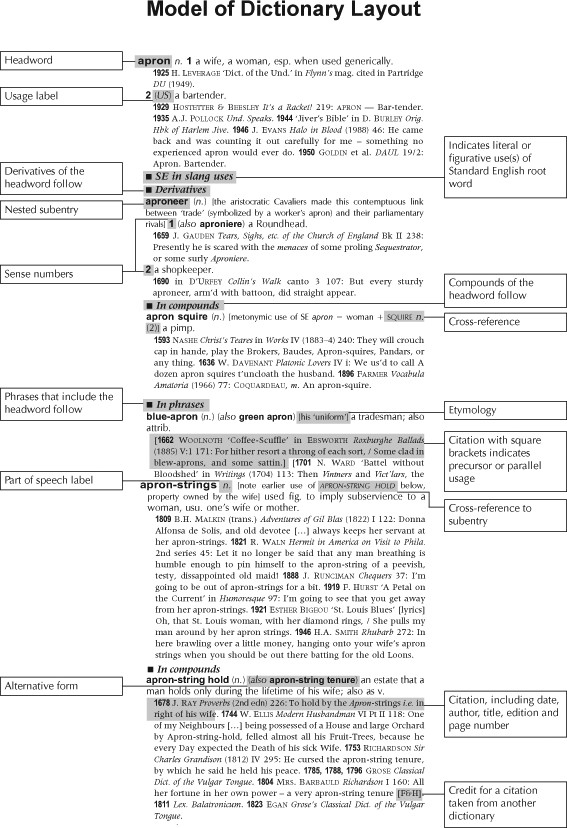